The OECD has released its annual Revenue Statistics Report comparing the tax data for all OECD countries .

2. taxes on personal and corporate incomes are the leading revenue sources in 18 OECD countries, with income taxes contributing to over 40% of total revenue in 2017 in both Australia and the US, as well as in Canada, Denmark, Iceland, Ireland, Mexico, New Zealand, Switzerland.
(Refer Annexure A below for a summary of the tax ratios for each OECD country)
The US and Australian Tax Statistics
Of particular interest to us are the US and Australian statistics:

Table 1. US and Australian Tax-to-GDP ratios

Asena Advisors is the only multi-disciplinary (Accounting and Legal) international CPA firm in the United States that specializes in U.S. -Australia taxation.
Contact

The individual country reports for the US and Australia indicate that the tax structure in each is characterized by:

Table 2. US and Australian tax receipts

5. Both countries having a federal governance structure. Federal government receipts in 2017 were 80.6% of total revenue in Australia and 44.5% in the US (compared to the OCED average of 53.8%). The State government share of receipts in both countries were similar (18.3% in the US and 16% in Australia), although there was a large disparity at the local government level (14.3% in the US and just 3.4% in Australia).
What opportunities to these Reports present for companies and private clients with interests in both the US and Australia?
These statistics illustrate the tax planning opportunities that the disparities in tax receipts represent. For example, both countries have high personal taxes, whereas there is a significant variation at the corporate level and on payroll taxes, thus representing potential opportunities for business structuring in the US. The variations in taxes on social security contributions and property (with the US being higher) also represent opportunities for structuring retirement contributions and holding property in each jurisdiction.

ANNEXURE A. Summary of key tax revenue ratios in the OECD 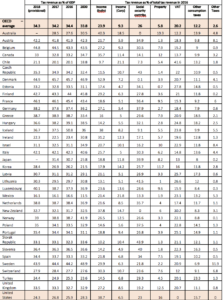