In our whitepaper, The Expansion of “United States” Taxpayers: How the TCJA Drags Unassuming Foreign Companies and Individuals under its Scope, we discuss the how the Tax Cut and Jobs Act of 2017 significantly expands the number of shares a U.S. Shareholder may be deemed as owning for purposes of determining whether a foreign corporation is a CFC. In our last few blog posts, we introduced the three types of ownership (direct, indirect, and constructive), as well as the three types of attribution that give rise to constructive ownership (family attribution, upward attribution, and downward attribution). These concepts can be hard to grasp so we wanted to provide an example illustrating the interaction of all of these rules in determining whether a foreign corporation is a CFC.

Part One: The Original </3>
In the following diagram, we are trying to determine whether Y is a CFC. Most of the diagram is self-explanatory, but there are a few items to note. First, the only U.S. Persons are P and Z, and every other individual/entity is a U.S. nonresident alien. Secondly, P is C’s parent and C is P’s child. Lastly, C and A are the only two beneficiaries of T, so they have equal shares. 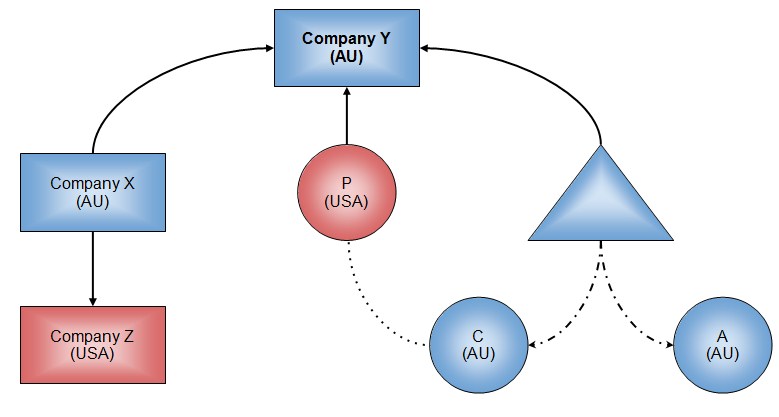 Under the TCJA, Y will be classified as a CFC for U.S. tax purposes if at least 50% of the shares are owned by or controlled by U.S. Shareholders, either directly, indirectly or constructively.

In this scenario we do not have any indirect ownership. While T is holding the shares on behalf of C and A, all of them are nonresident aliens.

T is holding 20% of the shares in Y for the benefit of its beneficiaries, C and A. Under upward attribution, C and A will be treated as indirectly owning their pro rata share of T’s interest in Y. In other words, C and A both indirectly own 10% of Y.

Under this diagram, U.S. Shareholders directly own 20% of Y and constructively own another 20%. This equals to 40% ownership of Y by U.S. Shareholders. This is lower than the 50% threshold required by the Code, so Y will not be a CFC.

Part Two: Original with a Tweak

If C were a U.S. Person instead of a nonresident alien, then our analysis would change.