In our blog post titled “Owning” Shares that aren’t Yours: The Code’s Confusing Definition of “Ownership”, we introduced how U.S. Shareholders of a foreign company are deemed as constructively owning shares for purposes of determining CFCs. Then, in Parts One and Two on the “TCJA Attribution Rules” we discussed two of the three attribution types: family attribution and upward attribution. Accordingly, we will discuss the final of the attribution rules: downward attribution.

Prior to the Tax Cuts and Jobs Act of 2017, Section 958(b)(4) of the Code stated that the rules on upward attribution “shall not be applied so as to consider a U.S. Person as owning stock which is owned by a person who is not a U.S. Person.” Under this rule, if you had foreign parent company X, with one U.S. subsidiary, A, and one foreign subsidiary, B, then A would not be treated as constructively owning the stock in B through an attribution of stock from B to X and then X to A. Thus, A could hold 49% of the total value of B without B being classified as a CFC. 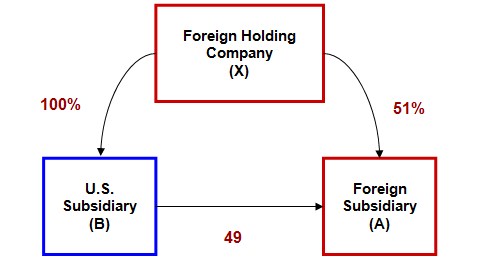 The TCJA repealed section 958(b)(4), so shares are now attributed from a foreign subsidiary to a U.S. subsidiary through its parent. Using the same example, where A owns 49% of the shares in B and X holds 51% of the shares in B, then A will be treated as directly owning 49% and constructively owning 51%. B will be classified as a CFC because A, a U.S. Shareholder, controls at least 50% of it. 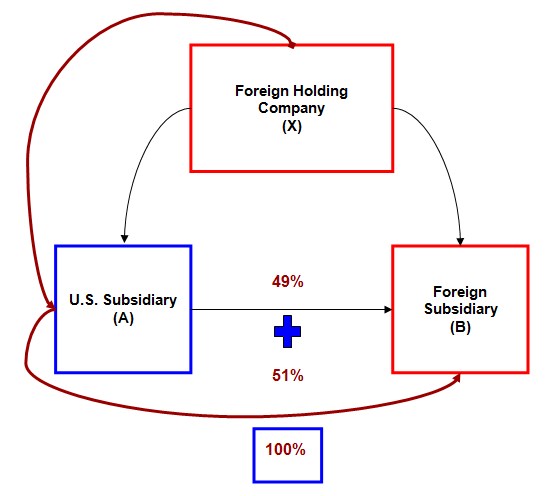 If you have entities and persons that are linkedin through international structures, you may have a CFC and be subject to the CFC rules. Accordingly, you should seek guidance on whether you have a CFC, and if you do, the reporting obligations associated with it. Moreover, if you are planning to create a global structure, you should seek guidance prior to doing so as to avoid any tax surprises. For an in depth analysis on CFC and downward attribution, please refer to our whitepaper, The Expansion of “United States” Taxpayers: How the TCJA Drags Unassuming Foreign Companies and Individuals under its Scope. Please also reach out to us at asenaadvisors.com for counseling on how to protect your assets and be tax compliant worldwide.